"If you believe and work , you can" 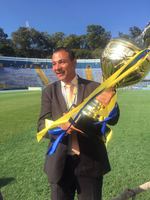 He was National and Central American champion , with Municipal in 2001 and won three championships with Independiente ( 88, 89 , 90) . Tapia juice 385 official games, getting 80 screams.

We use cookies to enable the proper functioning and security of our website, and to offer you the best possible user experience.

You can customize your cookie preferences here. Enable or disable the following categories and save your selection.